1. dec 2009 Oh yeah, noo, it’s a road, right ... Jyllinge[road]? Well, but everybody familiar with the S-trains in Copenhagen, especially between Ballerup and Vanløse, knows that Jyllingevej is the last station before Vanløse. And now it is no station.

1. dec 2009// public space /danish railways // permalink
Well then, Jyllingevej is the last station (if I may insist) before Vanløse, and thus of some interest. Since this very morning a pour fellow has thrown himself out in front of a train. So: “Herlev. Due to a collision on Vanløse has all train been stopped between Herlev and Vanlose. This train doesn't go any further. There will be busses instead.” Oh, well. A bus ride to Vanløse, wasn't exactly my best wish this morning. I'd rather wait to see if the trains start again before too long. Or, if just we could have taken the train to Jyllingevej, I could easily have walked the rest. I had to ask about that – why not ride the train to Jyllingevej? The first driver I see claims that he would like to answer, but continues his high speed walk, so I doubt that he is serious about that. That is the next driver, he answers: – That's because Jyllingevej is no station! – Sorry? Jyllingevej station ... I mean: train, platform, train stops, people in and out from the train ... station !? – Nope. – Eh? – Ah yes, you guys call it a station, but it’s not. I would say, that the Danish Railways (DSB) themselves call it a station, maybe only now and then, but still. It might be that DSB for these occation just want to communicate in the language of their customers – even though it’s not completely clear, but still – still. – There must be a switch, so the train can cross over to the other track and go back. Otherwise it’s no station, continues the driver. Okay, that is an explanation. And bottom line is, indisputable, Jyllingevej is no station.
2
23
23

20. JAN 2011 // berlin
After visiting Buchstabenmuseum in the fall 2010, I started to register this applied typography in big scale in Copenhagen. Big letters, neon, and stuff.
As far as I remembered, this was different from how it was back in Copenhagen. Consequently I started to look around here, and of course there were many more than I expected. […]
3D enlightening Copenhagen //permalink (135)

Apps for traffic information can be useful, but not all the way ➜

8. OKT 2011 // apps /dsb /navigation /offentligt rum
I know it sounds a bit paradoxical. Usually I call to recognize randomness as a condition of life. But when it comes to traffic and road out in the public domain, I freak info. The more data available, the better, it's just like that. And when it comes to public transport ... How long time before the next train, do I sprint, wander, […]
Apps for traffic information can be useful, but not all the way //permalink (116)

Don’t buy a train ticket with this app ➜

25. JUL 2011 // reklame /offentligt rum /apps /dsb
Unfinished, ill-considered apps or apps that serve the market better than the use off it. If Apple has a sometimes paranoid restrictive approach to the formalities regarding an app you want to get into the App Store, they may have a comparable little interest in that the app works well. Fortunately, one could say, that should be […]
Don’t buy a train ticket with this app //permalink (114) 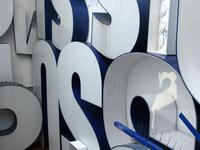 9. DEC 2010 // typografi /reklame /offentligt rum /berlin
Buchstabenmuseum Berlin. Why are these letters so attractive? I don't get an answer at Buchstabenmuseum, but I most certainly get a wish to look after all these servants of the announcements, sofisticated as well as monumental.

16. NOV 2009 // offentligt rum
I don't think that it’ll cause any problem. I mean: Who really wants a burp . Compared to Deutsche Telekom’s attempt to trademark the color magenta ? No, I don't think so. It’ll pass nice and easy.
So what's the purpose, what is my intention, with the burp. But first of all I’ll show magnanimity. That’ll shine on the ethical […]
Today I’ll trademark a burp //permalink (31)

What if we take the money out of the equation ➜

20. NOV 2009 // offentligt rum
I went to see Michael Moore's film Capitalism. I did not expect me to laugh all the way through, but neither did I expect it that depressing.
Even though Mr Moore manipulates and search down the beings that fits his message exactly, they do exists the people who are chushes through the greed of the financial market. And it […]
What if we take the money out of the equation //permalink (30)

27. MAR 2010 // reklame /offentligt rum /dsb
Claim the real mayonnaise. Use Tungsram lightbulbs. Political incorrect ads are being revealed at Vesterport st.
Vesterport st (copenhagen - and I know it may not be a station, see “Jyllingevej is no station”) is being cleaned up. And these old ads are reveiled.
Vesterport st //permalink (90)

Warning: this is a rotary candle holder ➜

7. DEC 2009 // offentligt rum
Unpack, assemble and light. It’s so simple that I think I might have been able to it without the instruction. If it hadn't been for all the warnings.
Every second package in the presents game was from the Tiger shop. Things! It’s funny, and cheap. But most of it, I’m afraid, I would never have bought to myself. On the other […]
Warning: this is a rotary candle holder //permalink (56)