10. jun 1998 First the good news: The photography has lost its trustworthyness, because the digital technology has made it obvious to anybody that every photopgraphy can be manipulated.

10. jun 1998// design /illustration // permalink
And then the bad news: We are being told that actually the possibility of computer manipulation it self killed the reliability. And thus tend to maintain the illusion of the reliable photography. Well, yes and here you are: one thousandth, even as much as one sixtieth second with the truth, nothing past, nothing since. Even though the exposal time were longer in the beginning, the truth is short. But reliable? The danish author H.C.Andersen set up his own portraits – he should be seen in profile – and nowadays we hardly recognize him en face. A soldier in the spanish civil war shows his I’m-being-shot-stunt on several negatives. And a czech comrade vanish from the official photographies after he mysteriously jumps out of the window. Every picture has always potentially been a fake. The photography is dead, it’s a trustworthy as a stone. If we watch a picture of a two year old child who picks up paving stone, nobody would connect this and the same stone behind the broken glass of the bank. Ceci n’est pas une pipe. On the other hand, if the picture shows a young squatter who weighs the paving stone in the hand, well, then we have the story. But not necessarily reliable. On a meeting some years ago, when the photographer had just begun to fear for the electronic treatment of their pictures, the danish photographer Henrik Saxgren stressed out that the reliability af the photography didn’t matter. Most important is the trustworthy of the photographer himself. If you rely in the photographer, the writer or the neighbor’s wife – whoever tells you a story – then the story may be reliable. The picture may tell you a story, but it better be a good one. The picture of the bicycle messenger that cycles on the narrow bridge between two oil tanks, might as well have been manipulated, it would still be a good picture. The soldier in the spanish civil war is still a hell of a picture: you may get shot in a war! Not necessarily dead and gone, that’s not what the picture tells, although you might say: this is a man who dies for a just cause. So let’s return to the good news: Long live the photography that carries a story, not as documentation rather than association.
1
23

7. JUN 2014 // cd-cover
‘Grib mig’ is the title in danish, for the time being, of a coming cd, for which Marianne Mortensen and Michael Vesterskov had gathered four musicians for two days live recordings. I had the pleasure of being among the audience – and to design the provisional cover that together with a sign up form should make the audience pre-order […]
Catch me //permalink (141)

14. APR 2014 // design
Pattern with eggs for the tablecloth and the napkins for the easter celebration lunch. Enjoy. 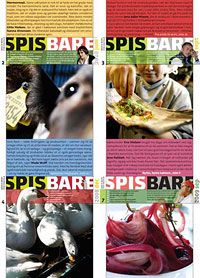 This is not a logo ➜

2. DEC 2009 // animation /den blå trompet /design /random /musik /logo
The logo is not an element, a graphical form, but the character in the way it is exposed in various contexts. Thus, the logo is not a categorism any more, but a organism, a being.
I was pleased at ‘Total Typographic Saturday’ in the end of october, as Tore Rosbo and Clea Simonsen from the design bureau 1508 presented the identity […]
This is not a logo //permalink (80) 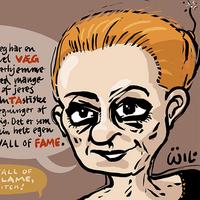 Cartoons that make somebody angry (2) ➜

2. JAN 2019 // illustration
It’s even small things that fires up the anger. Most Danish politicians, when they are the target of the satyre, have learned to make the best of it. The former Danish Minister for Imigration and Integration is like others hailing the cartoonists by in public saying that she has made her own Wall of Fame from the cartoons.
Cartoons that make somebody angry (2) //permalink (148)

Cartoons that make somebody angry ➜

14. JAN 2015 // illustration
The massacre on Charlie Hebdo is still all too present to talk about something as easy as to make somebody angry. Oh dear. But that’s a part of the theme of the documentary Cartoonists : Satire cartoons has to piss somebody off.

Cartoons that make somebody angry //permalink (144)

Yes to the saying-no-hat ➜

23. SEP 2014 // illustration
The Danish Psychology Professor Svend Brinkmann wants the saying-no-hat back, he says in the book Stå fast – et opgør med tidens udviklingstvang (Stand firm - a showdown with the development coercion). He recommends to focus a more on the negative in your life, find the saying-no-hat and suppress the emotions. We need input from […]
Yes to the saying-no-hat //permalink (142)

We are all numbers ➜

13. DEC 2013 // illustration
I try to ignore it. I’m turning into numbers. One by one. Meanwhile words become opinion, twisted to new, separated to pieces, in sudden beauty or occasionally despair. Temporarily. Numbers on the other hand are rocks. That get shaken when dressed up in words, in interpretation. Yet two is still two. Words loose the origin.
I […]
We are all numbers //permalink (138)